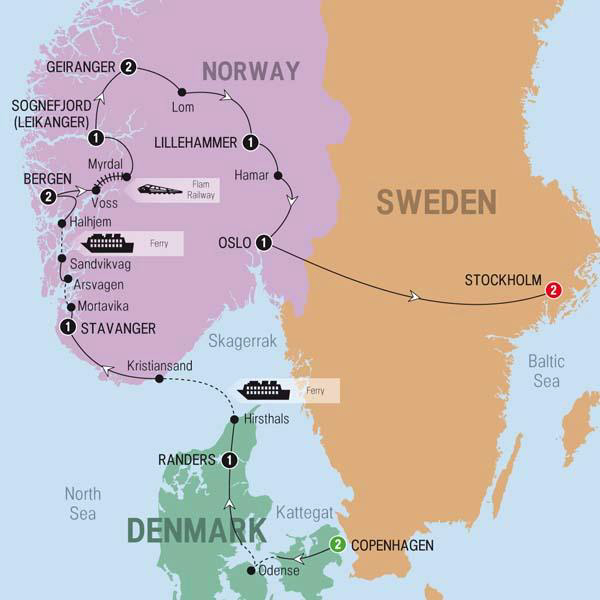 Scenic Scandinavia and its Fjords:  a Trafalgar tour
21 August - 3 September 2016
Carol, Jim, Laveta and I
Trip journal in (PDF)  5 Pages

Business Class Lounge at  SEATAC.  Our Flight to Reykjavik on Icelandair flight no. F1680

Waiting in Copenhagen airport.  Meeting our guide and orientation dinner in the Copenhagen Marriott.

Copenhagen waterways, Royal Palace and of course, The Little Mermaid

The young people of Copenhagen and our tour boat returning to our hotel.
Laveta in our hotel room overlooking Trivoli Gardens in the distance.

Carol onboard our buss to the fairytale village of Dragor with its thatched roofs.

Dinner in Dragor with our tour group, at the Strandhotel

One of the bridges to the Jutland peninsula

Walking in downtown Odense and inside St. Canute's Cathedral

Laveta & Carol at the home of Hans Christian Andersen

Our hotel in the small port city of Aalborg, Denmark and the restaurant that the four of us discovered

Dinner in the Scandic Stavanger hotel in Stavanger Norway.  On another ferry the following day

Troldhaugen- and the home of the composer Edvard Grieg

Sod covered auditorium and and inside for a piano performance.

Bergen- from the funicular overlook on the the summit of Mt. Floyen.   Downtown fish market.

Øvre-Eide Gård  farm, a short drive from Bergen, where we had a tour and dinner.

The town of Voss where we boarded the train to Myrdal, where we changed to the Flam Train (Flamabana)

Waterfalls and tunnels.  Stopping to get a wet view!

The Sognefjord Hotel  and our room.

Gerianger, at the end of the fjord,  where we would spend the next two days (could have spent a month)!

Our room... in Hotel Gerianger and Geriangerjord from on our deck.

On the road again- driving southeast, away from fjord country.
We stayed in the skiing town of Lillehammer, home of the 1994 winter Olympics

Oslo's City Hall  where the Nobel Peace Prize is awarded.

At the The Viking Ship Museum

A lunch stop in Karlstad, our first stop in Sweden

At the hotel bar

The four of us in Stockholm

Going out to dinner with Jacqui and our tour mates, in the old part of Stockholm 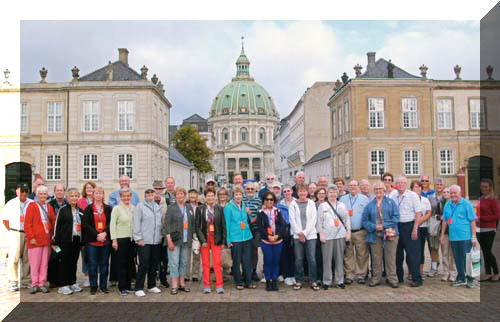