This  is  an imaginary tale.  Any resemblance to real persons living or otherwise is strictly coincidental

The flowers were beautiful. Reno leaned over the bouquet on his desk, breathed deeply and sighed.   Greg, at the next desk over, looked up and wondered what the hell was going on.  Six months earlier Reno would have smiled at the sight of a newly shot, six point buck lying in the bed of his truck- but flowers!  It was bad enough that the Quality Manager went around passing out stuffed animals.  The damn things were everywhere. You couldn’t look at anyone’s desk without a half a dozen of the stuffed creatures staring back at you with their cute, sickly eyes.  It was downright unnatural!

Years ago, when Greg began working at the company he had really worked his butt off.  If a guy screwed up or slacked off- he got yelled at!  He remembered his supervisor then, the one that the Quality Manager had called a “spherical bastard” because he seemed to be a bastard from whatever angle you looked.  It sure wasn’t a job for sissies then, he thought wistfully.  The workplace now was becoming more and more like the "Y".  What the company needed, Greg was sure, were more spherical bastards, fewer flowers… and f--k the stuffed animals.  He also breathed deeply and sighed as he thought about retirement.   It couldn’t’ come too soon.

On the shop floor Corry, Darlene and the other girls went about their jobs feeding the computer controlled milling machines which were always hungry and required constant tending.  But at least the working conditions had improved over the last few months. The improvement Corry knew, was not an accident, but the result of a well executed plan. “Men were so simple, unsuspecting and easy to control!

Last Fall, the delivery schedule became hopeless as customers grew ever more demanding and uncaring.  Employees felt that their working lives were being sacrificed on an altar of production.  Men, Corry noticed, when subjected to such stressful conditions, tended to yell and posture unproductively.  Darlene was convinced that the root cause of management's problem was Testosterone Overload Disorder.   Meanwhile, conditions went from bad to worse.  Something had to be done.

Corry racked her brain.  “Ask why five times.” Wasn’t that what they kept saying in “Performance Breakthrough” classes? And then the revelation!  If testosterone was the problem, might not estrogen be the solution?  Estrogen- used as a Weapon of Mass Production?  Better management through applied chemistry!  "Wow” Cory thought with pride and satisfaction, “that’s really thinking outside the box.”

Obtaining enough estrogen would be easy.  Hell, hardly any the women in the QA department still had ovaries!  They all took “Premarin.”  The estrogen supply wouldn’t be the problem, they would just ask their doctors for more.  Getting the estrogen into management’s blood­stream would be the problem.

So they formed a “Tiger team” and worked out a plan. Would their supervisory victims, err… patients, taste Premarin in their coffee, they wondered? cookies? chocolate?  The QA Manager would turn into Miss America the way he ate chocolate!  They’d have to be careful. Their first objectives would be supervision and the V.P. of Production.  Yah- He called altogether too many meetings, proposed too many changes.  It was all too stressful.  If they were successful, there would be a lot fewer “Lean Manufacturing ” and more human relations classes on subjects like: “Emotional Intelligence.” 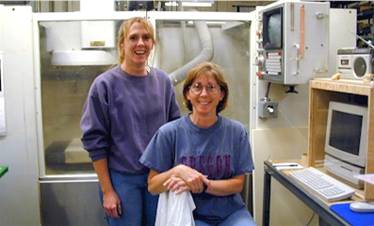 The team looked forward to a kinder, gentler workplace.